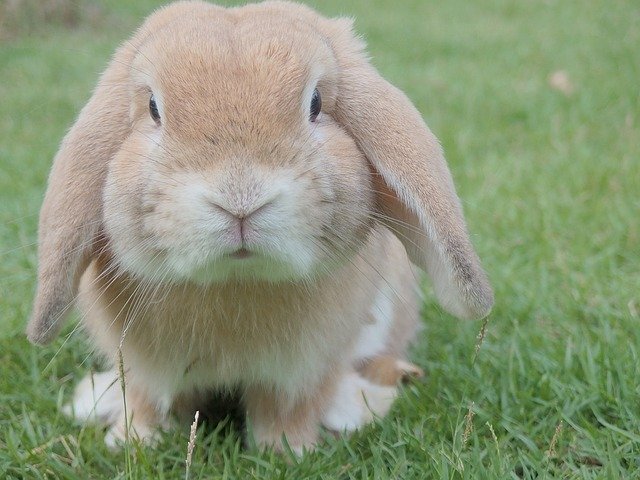 Even though bunnies don’t speak, bark or meow, they have their way of telling you something. The question is – do you speak rabbit language? Pay attention to their behavior so you can catch signs.

When they want something, like a cuddle or that thing you are eating and not sharing, they’ll nudge you with their nose. And probably look at you with those sparkling eyes begging and wait for your response. Some bunnies will also boop your nose with their as a way of kissing.

Rabbits have scented glands under the chin so they often rub it on things and even on you. It means you belong to them – they are marking you like that.

Rabbits in groups spend their time grooming each other. Maybe you’ve noticed that your bunny is licking you while you are cuddling him. It’s a sign of affection, so it means he is cuddling you back.

Sometimes when you cuddle your bunny he is grinding with his teeth. That gentle grind means he is enjoying (almost like purring). But if he is crunched like a chicken on eggs with his ears down, and that grind sounds unpleasant and loud, he is probably in pain and doesn’t feel well.

Thumping foot on the ground usually means something is not right. If your pet rabbit does it in a row, while almost paralyzed, only with his ears moving, it means he senses danger. It is usually followed by running in panic.

But sometimes they’ll smack their foot on the ground while you are doing something they don’t want – like putting them back in a cage. Or he just likes to talk back when you are giving him a lecture about something bad he did. You’ll also get shaking head like something stuck on their fur and an imaginary kick in your face while doing that. Having a rabbit sometimes feels like having a child!

Rabbits looove to jump. Sometimes they’ll run all over the place in a frenzy, jumping over furniture and things at high speed. And sometimes they’ll add a special twist in the air, with clicking their feet together. That dance is out of pure joy. They are in a playful mood, excited and like to show it.

Something that can follow those dances is flopping. After a good dance, everybody can get tired and just want to collapse in contentment. At first, it will be scary! They can do it out of nowhere too and you’ll think your bunny passed out, but after a while, you’ll know. Bunnies get tired quickly so a good sleep and dream are crucial.

These are just some examples of how interesting rabbits are. Feel free to add more and good luck at becoming a real bunny whisperer!